New York is an impressive and throbbing metropolis, a melting pot of peoples and religions, but it is also a city of immigrants. Names such as Chinatown, Little Italy, Harlem or Greenwich Village testify to this fact. It is also known for its unique skyline of skyscrapers along the Hudson river. When Kees Vlak composed his overture, he got his inspirations from the music of the great American composers Copland, Gershwin and Bernstein. Motifs from their works run through New York Overture like a thread.

The composer describes his overture as follows:
New York Overture opens with the landing on Kennedy Airport. Approaching it, the visitor was already thrilled by the aerial view on Manhattan (“First view over Manhattan”). In the morning we pay a visit to “Battery Park”, the southernmost point of New York. From here you may walk along the Hudson river, enjoy the sight of the harbor or admire the historic guns in the park which were to defend the town in the past. We then will go down town.
“5th Avenue”, flanked by grandiose skyscrapers, is the most important and truly busiest of New York’s shopping streets. “Sak’s Fifth Avenue” is the oldest and most expensive emporium in New York city. Immediately next to it you will find “St. Patrick’s Cathedral”. The Kennedy family would often attend the services in this cathedral. We will enter and enjoy the silence prevailing in this place of worship. A Gregorian chant is heard as well as bells from the outside.
In our tour of the city we next get to see “Harlem” with its predominantly colored population. This is the natural focus of jazz – and Harlem is a truly swinging district. There are jam sessions all over and we also find there the famous “Cotton Club” boasting appearances by all celebrities in the world of jazz. However, the atmosphere of Harlem is a menacing one, very much like Bernstein’s description of it in his “West Side Story”. Next we visit “Central Park”, which is New York’s breathing space and oasis of silence in the middle of a vivacious city. The Lake is the center of this famous park. It is a cherished rendezvous for lovers, but you may also listen to a concert there, hire a boat or simply indulge in jogging. If you then happen to meet a park keeper on horseback (“The Parkguard”), this will probably take you back to the Wild West.
From here we proceed on farther south “Down Town” until we are “On Broadway”, which is known for its brightly lighted theatre section, jazz clubs, discotheques, and dance halls, where, for example, in “Roseland Dance City” two bands strike up a dance. In the overture a Puerto Rican tune is heard.
Finally we decide to say good-bye to New York. Being overwhelmed by what we came to see that far, we enjoy the harbor (“New York Bay”) one more time and take in the majestic sight of “The Statue of Liberty”. 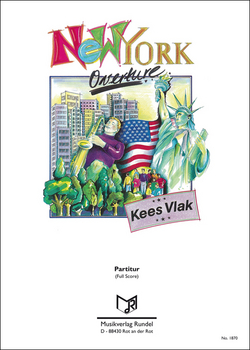